My freshman year in college, a former rower stopped by our boathouse following the birth of her first child. At that point in my life, and in the lives of all the women I rowed with, a 2000 meter race was the most intense pain any of us had experienced. We were quite certain nothing could top it, though some workouts and erg tests came close. So of course our first question as we huddled around her: “Was it as painful as a 2000 meter sprint?” I’ll admit I was pretty sure she was going to say no.

She replied it was much worse.

Worse?! You could just see the fear on everyone’s face, the quick dashing of plans for children in that very moment.

In the years that followed I carried that information with me, along with memories of rowing pain. There were times in some races where I was quite certain I would die, right there, on the spot, and fall out of the boat. I remember thinking, “I guess I’ll keep rowing because everyone else is still going, and I don’t want to let them down and if I die, I’ll just die. And then I’ll be done rowing.” And that thought seemed pleasant. 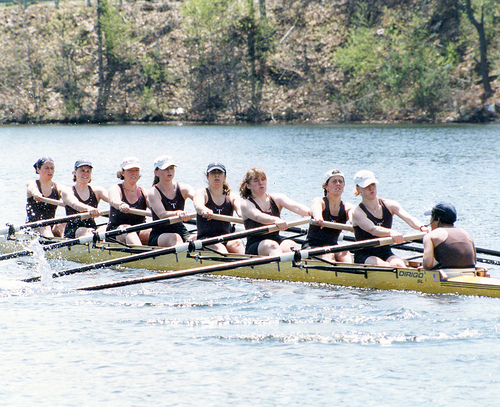 Over the ensuing years I’ve done physically grueling things: hikes, weight training, intense spin classes, swims in a rough ocean, even a marathon. Nothing comes close to the pain of rowing. Nothing.

So when I got pregnant with Ollie I knew I wanted a natural childbirth with no epidural. After all these years, I’d be able to see how something could possibly be more painful that rowing! Because Ollie was overdue, I was induced and I managed 13 hours on Pitocin, all through the night, in agony, before I succumbed (in tears) to an epidural. Ollie was born two hours later.

With Minna I was determined to avoid that situation, and worked with a midwife throughout my pregnancy and planned for a home birth. I labored in my living room, watching the Giants vs Cowboys, then paced, breathing and counting. The counting’s a holdover from rowing, when we’d do “10s” for power, or technique, and you’d just do ten strokes to focus on pulling ahead of another boat. I do 10s when I run, or whenever I face a physical challenge. I count through the pain.

Jason filled the birthing tub and after a few hours I decided to get in. Instantly the contractions slowed and the water felt fantastic. The midwife had arrived and the three of us actually just hung out and chatted, and I’d pause to do some deep breaths when a contraction arrived. Since Ollie’s birth had taken so long, I assumed I had hours to go in the tub when suddenly I felt the baby and needed to push. I gave two excruciating pushes. My midwife checked the progress.

“Do you think it’s five more pushes?” I asked her, hopefully.

“Well I can do five!” I said, in some kind of crazy counting birthing delirium.

I didn’t need to. Minna popped out after two.

In rowing we used to always throw around the saying, “Pain is temporary, pride is forever.” I get to look at my two great kids every day. In a box in the closet is my gold medal from the 1992 New England Rowing Championships. If it wouldn’t be weird to wear it around, I probably would.

Now for something not food related! Yesterday I went to Jack Rabbit Sports, a sport store that recently opened near Union Square in Manhattan. (They've also got a Brooklyn location that's been open for a while.) It was far and away the best shoe store experience I've ever had, and I don't think I'll ever buy a pair of sneakers anyplace else again.

First step: evaluating your foot and watching you run. They put you on a treadmill in the shop and watch the way you run and how your foot strikes. Then they start bringing out shoes for you to try, and each time you get back the treadmill and test out the shoe. The guy we worked with was knowledgeable and very helpful, and sent me out the door with the first pair of non-Asics running shoes I've owned in twenty years!

They also offer classes, custom bike fitting, and 10% everything you purchase after your first purchase. They had clothes too, but I was so excited about the sneakers that I didn't even look at anything else. I [heart] Jack Rabbit Sports!

Former US ski team member, and gold medalist, Picabo Street has a blog! You may remember her from the 1998 games in Nagano. She won the gold in the Super G. She's in Torino now as a special correspondent for NBC. While there, she's keeping a blog on the Torino experience, especially now that she's getting to enjoy the Games as a spectator rather than a competitor. Neat.

Speaking of wanting it…you can watch me "go for gold" in a little video Jason's posted to his site: Skiing videos. It's the bottom one, and it's small and blurry. But it's still kind of fun, I think, though decidedly less exciting than watching the men's downhill. Oh well…

Washington Post columnist Sally Jenkins give US skiers Bode Miller and Darren Rahlves a hard time in her column, U.S. skiers 'Best in the World'? Not a chance, for not 'podiuming' (that's what the snowboarders call it, dude!) in Sunday's men's downhill event.

Miller skied with more abandon, actually leading the race after the first time interval before he inexplicably let time leak away in the lower section of the course. But afterward he was vague and esoteric, suggesting that he skied to some purer, invisible, inner standard of excellence.

"I feel I skied the way I hoped would reflect a positive objective end result," he said. "But when there's a discrepancy there, you have a moment of confusion and disappointment. But after that, what can you do? My subjective criteria was satisfied. Subjectively is how I ski."

Maybe I'm too dense to appreciate the subtleties of Miller's subjective goals. I thought the point was to ski faster than everyone else. The trouble with Miller's articulacy is, sometimes it sounds like excuse making.

Usually I hate the focus on winning a medal at the Games, especially the "quest for gold" bs that consumes the US broadcasters every Olympics. But this time I think Jenkins may have a valid point. Rahlves and Miller both had the fastest training runs. And then before the event there was all this crazy last-minute changing of equipment, with Miller skiing on some new factory-fresh pair of skis, and Rahlves planning to and then switching back to his old skis only minutes before his run. That just struck me as odd.

Then the races themselves. Both guys looked fine out there, but not aggressive. Not like they wanted to win. Sure it's important to be satisfied. And sure, you don't want to beat yourself up when, as Rahlves said, "I did what I could, and that's how it turned out." But come on! It's the Olympics! You gotta want it! Enough with this new-age touchy-feely satisfaction of some inner criteria, bring home the hardware!!!

Yes, it's 18° outside, but that only means one thing to me: the snow isn't melting! After a slow and a later-than-normal (skiing) start, we're heading over to Mad River for our first ski day of the season. Hopefully the old legs still have it! Ok, no more blogging, on to skiing!

What would Johnny Damon do? Apparently, it's leave the Sox for the *@!&**&%!! Yankees. Boston Globe columnist Dan Shaughnessy has the sad details today in For Sox, a little off the top. If it's not the Curse of the Epsteino that's bringing this down upon the Nation, perhaps it's a Curse of the Queer Eyes. Of the five Sox who appeared on "Queer Eye for the Straight Guy," (Kevin Millar, Jason Varitek, Johnny Damon, Tim Wakefield, and Doug Mirabelli), only Wakefield and Varitek now remain.

Barely behind us, it seems the dark days of tragic losses for Red Sox Nation might again return: Red Sox General Manager Ends a Memorable Run. Is the "Curse of the Epsteino" in our future?

During the past decade two barefoot-style training methods for runners have been developed based on the same principle: that legs, not shoes, are the best shock absorbers. That is, you land on your forefoot, instead of your heel, and paw back.

Many people now think that structured running shoes are leading to "lazy feet", that is feet that have under-developed muscles and are therefore more prone to injury. Running barefoot, or with new less structured shoes, may help strengthen feet and eventually lead to less injury. I'm curious about the claim, though not entirely convinced. The article says a lot of things that make sense to me.

Last night's Super Bowl was pretty good, especially once the Pats started playing better in the second half. To show our support for the team, we made 'Teddy Bruschettas' — one set topped with chopped mushrooms sauteed in butter with garlic and dried sage and the other with warmed tomatoes, basil, and garlic cooked in olive oil. Both types were delicious, and I'm sure supported not just Teddy Bruschi but all the Patriots! Aside from burning the first batch of toasts so badly that flames were shooting out the oven, it was pretty successful. I recommend Teddy Bruschettas for all your Patriots game dining needs.